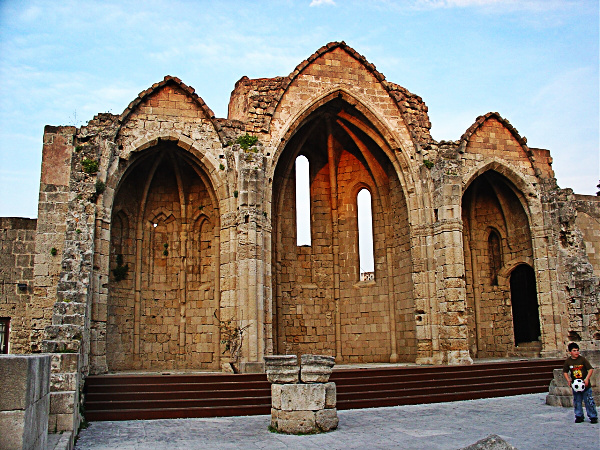 Churches that were not turned into mosques by the Ottomans

It’s a gothic cathedral of the three-aisled basilica type with two arcades created by four columns and pointed arches. It was constructed in the beginning of the 14th century. Panagia tou Bourgou is also known with the names Virgin Mary of Mercy (Beata Maria Misericordia Burgi Rodi) and Virgin Mary of the Metropolis (Beata Maria of Metropoli). Today the area has been partially restored wherever possible, it is open to the public and sometimes musical events are held in its interior. The restoration of the monument received an honorary distinction from EUROPA NOSTRA in 2006.

The archaeologists originally believed that it was located by Agia Eikaterini’s Gate. The result of an excavation at a nearby unidentified church on Kisthiniou street, created doubts on which of the two churches is the Catholic church of Panagia tis Nikis. It was built by the Grand Master Pierre d’ Aubusson in the 15th century and was destroyed by the second ottoman siege in 1522 A.D. This church accommodated the Franciscan order. Along with the Augustinian order, they were the most important catholic monasteries on Rhodes island. The Franciscans built the new Catholic church (mostly known as Sancta Maria) in 1743 A.D. in the district of Neohori.